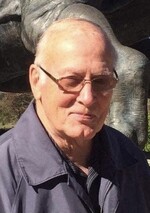 John DeBoer, 89, of Simpsonville SC, went home to his Lord and Savior Jesus Christ on Christmas Eve December 24th 2020 with his loving wife and children at his side.

John was born on November 13th 1931 in Waldwick NJ to Cornelius DeBoer and Nellie (Dykstra) DeBoer. He was the 4th of 6 children. He is survived by the oldest, his sister, Janet (DeBoer) Miedema. His 4 brothers Clarence, Frank, Peter and Marvin predeceased him.

John’s childhood was difficult due to The Depression. He and his siblings did many odd jobs and moved multiple times to make ends meet. John quit high school to run the farm due to hardship at home. He joined the US Army when he was 23 (from 1954-1956) driving tanks, as the Korean War ended. He returned home early to care for his mother. He continued caring for her well into his marriage until her death in 1968.

John met his wife Lois Grace LaFleur in 1962 on a blind date. John was a very good bowler. He fell in love with Lois at her first strike. They were married on January 25th 1963. They were blessed with 5 children and raised them in West Milford NJ. In 1999 they retired in Simpsonville SC to be near their children.

John was a quiet, humble man. Those who knew him best knew that his love for the Lord was in every fiber of his being. He served as a deacon and elder at Pompton Plains Reformed Bible Church in NJ. He also served in their homeless program and sang in the church choir. He worked so hard for his family and sacrificed everything for them. The fruits of his labor can be seen in the generations that have followed him. Due to his boldness when it came to Christ, his legacy lives on in the faith of his family. We will be together again in Glory.

In Leiu of flowers we ask that donations be made in his name to the Calvary Home For Children at 110 Calvary Home Circle. Anderson SC 29621. A private graveside service will be at Graceland Cemetery on the morning of January 2, 2021. Following, there will be a Memorial Celebration Service at their church home: Woodruff Rd Presbyterian Church, 2519 Woodruff Rd, Simpsonville SC 29681 at 2:00 PM on Saturday January 2, 2021.