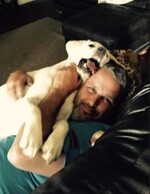 Johnathan David Vallely was born in Greenwood, South Carolina, on November 15, 1973. He was born into a set of unfortunate circumstances that followed him through childhood into his adult life, as many children today suffer from similar situations. His life served as an example of what can happen to children when they are raised in homes with abuse and neglect, as he spent a significant amount of his life in and out of foster homes, until he was finally old enough to live on his own. Though the multiple foster homes and families him and his siblings were passed through, Johnathan always was there to stand as a strong protector, taking responsibility for not only his own actions, but that of his siblings when he feared their punishments. Despite the severe physical and emotional pain he was put through, he loved his family enough to take on those burdens and fight the battles for them, and that spoke of his capacity to love with full force.

Speaking to the consequences of a tumultuous, frightening, abusive, and neglectful upbringing, John fell victim to the disease of addiction. In his youth, between foster care, boys' homes for wayward youth, and various punishments for acting out in school, he was an extremely intelligent individual with various talents and an overflowing heart. He wanted nothing more than to be a good man, a good father, a good brother, and a good citizen, but the pain and burdens he carried upon his shoulders were more than many of us could ever fathom. No child should ever have to endure the pain he did, and it could be said that the mere fact he was able to put a smile on his face and the faces of others is miraculous. Fishing was his escape, his safe space, and he deeply loved spending time out on the water away from everything, it was his peace and had him smile cheek to cheek when he caught a biggun'! He loved animals and was a man of faith, he could recite just about any bible verse if you asked him, and he had a beautiful and boisterous singing voice, even singing for a traveling church choir.

In the late 1970s, John and his siblings were adopted by Kathy and Myron Chorbaijian, known as Johnathan David Chorbajian until being the first male in the state of South Carolina to adopt his wife's name, making him Johnathan David Vallely. As he was a huge bookworm and very much an intellectual at heart, he was a top scholar at Bob Jones University, later moving on to own and manage several different roofing and construction companies. John married Dawn Noel Vallely in 1997 and together they had a daughter, Noelle Virginia Vallely (23), in 1998, and a boy in 2004, Dominic Johnathan Vallely (18). As much love that he had for his family, the traumatic events of his childhood dominated his ability to lead a life of 'normalcy' in his adulthood, which led him down a rather destructive path. A slave to his addictions, as many others face these demons on a daily basis, he lost everything in his life, more than once he hit rock bottom.

As the sad story of many who suffer at the hands of abusive and neglectful family members, John adopted maladaptive coping mechanisms that took over his life, it was a destructive love and first hit. In his own words, he admitted his addictions were so strong, even the love of his children couldn't save him. Divorced in 2009, numerous times in and out of rehabilitation facilities, jail, and halfway homes, he was left penniless, homeless, and unrecognizable, he had become a shell of the person he wanted to be. On April 26th, 2022, our Creator called him home, and he is now free to be at peace, no longer haunted by his demons and hurt of past traumas, he is able to be truly happy. The authentic John could put a smile on anyone's face, sell a bikini to an eskimo, and love like no other! He will be remembered as a jokester, a lover, and one with charismatic soul, with a love for fishing, boating, singing, playing games, and spending time with his family.

The pain and devastation of John's passing has been especially rough and arduous for his surviving children, Dominic and Noelle, of whom witnessed both his absence and destruction his disease left on others first-hand. We find comfort in the fact that we know John is no longer suffering here on earth, he is at peace in the sky, sitting with his fishing pole while laughing and cracking jokes! The demons may think they have won, but he is no longer in mental and physical pain. We send him so much love, as he is missed dearly.

Johnathan is survived by his children, Noelle and Dominic, his adopted parents Myron & Kathy Chorbajian. He is predeceased by his brother Tiger and sister Stacey. He is survived by his siblings Tammy, Pam, Chris, Rick, Teresa, Rita and Karissa & along with his aunts, uncles, nieces and nephews.

Memorial Service will be held: May 20 at 12pm
Brookwood Church -580 Brookwood Point Place, Simpsonville, SC 29681
In lieu of flowers, please assist Johnathan's children to cover his final costs by clicking the link to GoFundMe.