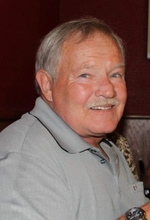 Lester Ray Long, Jr., at the age of only 66, passed away suddenly on July 9, 2020. Having the same name as his father, he was lovingly called “Les” by his parents, the late Lester and Mary Long, from the day he was born on November 11, 1953. That is, of course, unless he was in trouble for playing practical jokes on his three sisters, to which he was promptly called Lester!

While Les was born in Brooklyn, New York, he spent the majority of his childhood in Freeport, NY and attended Freeport High School. Soon after graduating, Les followed in his father’s footsteps and enlisted in the U.S. Navy, where he proudly served our country for over a decade.

Les spent the majority of his adult life in Upstate SC, where he enjoyed fishing, working on cars, helping anyone in need and bringing laughter and love wherever he went. He was an excellent bowler, for a brief period holding a world record as the youngest person to bowl a 300 game. He loved the Yankees and “his” Clemson Tigers.
However, his greatest love was his family, especially his two daughters (“his girls”) and all of his grandchildren (“his babies”).