To share your memory on the wall of Mary Bird, sign in using one of the following options:

She graduated St. Albans High School, St. Albans, WV in the Class of 1952.

Her Morgan ancestors came from the Shenandoah Valley, Virginia in 1846 and settled on land which is currently the site of the John Amos Power Plant, Morgan’s Landing, Putnam County, WV. This land was originally owned by Dr. James Craik, George Washington’s physician and was the home of Morgan’s Museum of Natural History from 1926-73.

She was a member of the St. Albans Historical Society and also of the Daughters of the American Revolution. Hobbies were painting, antiques, writing, genealogy—she even wrote an autobiography and a book about her Morgan history.

To send flowers to the family or plant a tree in memory of Mary Elizabeth Bird (Griffith), please visit our Heartfelt Sympathies Store.

Provide comfort for the family by sending flowers

We encourage you to share your most beloved memories of Mary here, so that the family and other loved ones can always see it. You can upload cherished photographs, or share your favorite stories, and can even comment on those shared by others. 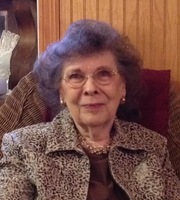