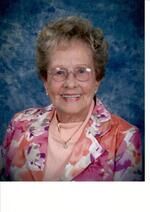 Molene Smith McDuffie, 99, of Greenville, widow of James Gartrell McDuffie, went to be with the Lord January 7, 2021. She was born in Franklin County, Georgia to the late Tilford D. and Flora Addison Smith.

When James graduated from High School, he played with the Boston Red Sox minor league team until he was drafted into the U.S. Army during World War II. Molene and James met while he was in the Service and were married on Christmas Eve, 1941, while he was home on leave.

Molene was an avid Braves fan, she always watched the baseball games with James. She worked in accounting, had her own beauty shop for years, and she retired from Countryside Village, when she was eighty years old.

She was a member at Berea Friendship United Methodist Church. She had been a teacher and a choir member in her earlier years. She had a blessed long life, as she lived by her faith in God. We, all miss her dearly, but we have those cherished memories to help us at this time and knowing she is in Heaven at peace.

The family would like to thank Pruitt Hospice for their special care.

A graveside service will be held Tuesday January 12, 2021 at 2:00 pm at Graceland West Cemetery. In lieu of flowers memorial donations may be made to: Berea Friendship United Methodist Church, 8001 Whitehorse Road, Greenville, SC 29617.