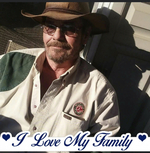 Terry is preceded in death by his two brothers, Wayne Parton and Ricky Parton.

He enjoyed playing with his grandkids, listening to music, playing the guitar, gardening and panning for gold. Terry will be remembered most for being a loving simple man that never held a grudge but stood firmly for what he believed. Terry proudly served four years in the United States Navy. His happiness came from family and music. He wanted everyone to remember him happy and healthy and for no one to mourn his death but rejoice for his new life in heaven.